Against the background of the government change, long-term discussions have been held on the expected tax amendments, in fact, first of all, on the cancellation of the amendments already planned. Now, i.e. as of the end of the year, a certain amount of clarity has been achieved. The President of the Republic has promulgated the so-called draft package of amendments to several acts and at present we can talk about major amendments to the Income Tax Act and Social Tax Act to take place next year as well as the year after next. Of course, everything may change again, should the existing government coalition fall apart, but we will certainly see what happens in the near future.

Until then, one of the most urgent questions that accountants have faced is the social tax rate in force from the next year. In order to pay salary in January, accountants must have their programmes configured in advance according to the social tax rate to be imposed on payouts starting on New Year’s. There is not much time left till the end of the year.

Estonian economy has become highly competitive and it supports big international companies as well as newly established start-ups. In recent years Estonia has become the…

From 2018 to 2022, the principle of tax exempt income for natural persons applied uniformly – up to 6,000 euros per calendar year and up… 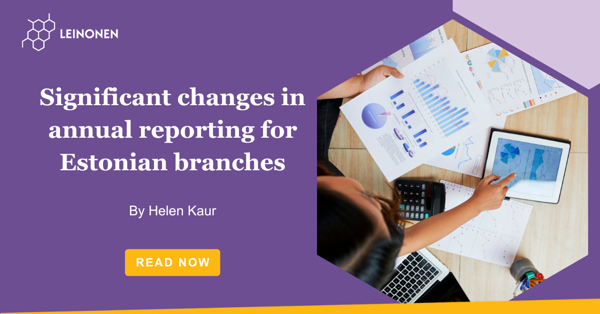 On 31 December 2021, the provisions of the Commercial Code and the Accounting Act entered into force, which somewhat amended the accounting of branches of…